Visions of (actual) Sugarplums Danced in Our Heads

Posted on March 19, 2013 by roundandroundinastraightline

We crowded into the small room and commenced setting up folding chairs to sit in and watch as the Master Pastry Chef manipulated molten sugar into swans, into flowers, into golden braid, and into fruit blown from sugar, light as air. The work was fanciful in result and intensely focused in its achievement, molten sugar must be handled with the utmost respect.

Master Pastry Chef Jean Crevaux, now in his eighties (with the energy and enthusiasm of a man half his age) had done us the very great honor of inviting us into his home for a demonstration. At his side to assist was Chef Gil, a Master Pastry Chef in his own right and watching and translating for us was Chef Delphin Gomes who had accompanied us from New England where he, also a Master Pastry Chef, heads up the professional Pastry Program at The Cambridge School of Culinary Arts who had sponsored the trip. 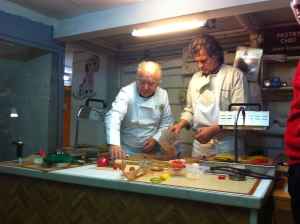 The demonstration was wonderful but the greatest treat for me was watching these three men together, their affection for each other and their mutual respect so very apparent. It was a remarkable opportunity to see such dedication to the art of sugar decoration, something that is so temporal, so seemingly frivolous and yet, in its execution, something that is anything but frivolous. Chefs Gil and Delphin had apprenticed with Chef Jean in their teens and these two men, now middle aged, clearly felt love for and gratitude to this third man, who had not only taught them how to be great Chefs…but also, one suspects, about life and about being a good person, about respect for their work and also respect for others. It, all of it, a privilege to witness.

I was on a culinary tour of France with an emphasis on pastry skills. We had begun in Lyon and wended our way via Beaune and Epernay to Paris. Armed with confidence from last fall’s bike trip that I took with a group of strangers to Europe,  I decided to do it again . I would once again close my eyes, jump in with a crowd of folks completely unknown to me and just see what happened.

Surprising myself completely with the result… but I am getting ahead of my story.

What I did not know, and what might have dented my brio a bit, was that, in addition to everyone else on the trip knowing at least one other person, most knowing several other people,  nearly every other participant was a professional chef in their own right. Gulp.

Actually, as it turned out it didn’t matter. They all were warmly welcoming and even the most advanced chefs among them were there to eagerly learn and experience, just like me. It was a wonderful group of people.

I had arrived in France a few days in advance of my culinary adventures, which allowed me the joy of a visit with a very good friend who lives on the outskirts of Lyon with her husband and two sons. It was such a delight to walk on the stone streets of her small medieval village, past (three each in as many blocks!) boucheries, boulangeries and flower shops and to talk and eat and laugh. I was so happy to see her in situ and see firsthand the beautiful life she has created for herself in France. I admire her bravery in setting up life in a country so far from where she was raised.

It was fun too to have some blocks of quiet time, to explore a city that was new to me all by myself and to shake off my rusty French and make myself understood! I had a blast.

And then the trip “proper” began! And what an absolute whirlwind it was! Dinners ending at midnight did not preclude early morning wake-ups. Wine at dinner did not preclude wine at breakfast! Seriously. I will explain. I promise. We learned, we made, we listened, we ate and drank , we talked and we walked…pretty much non-stop. We had culinary“back stage” access that I couldn’t have imagined. Throughout I felt the need to pinch myself that I was actually part of this… I was falling in love with this world.

The next twelve days were a blur of sights, sounds, sensation and tastes. We got to go behind the Madison Avenue like storefront of Bernachon to see the vats of chocolate ganache being stirred, the tin molds for Easter treats filled and cracked open by hand. We sampled the best Cassis I’ve ever had and learned how this is made and walked though the rooms filled with enormous vats of the stuff. We were up at 4am to visit markets, Le Marche Rungis was an extraordinary place, the largest wholesale market in the world with airline hangers dedicated individually to fruits and vegetables,to seafood,  to poultry, to game, to meat and to flowers. It is located on hundreds of acres, filled with dozens of hotels and restaurants to serve those who come here to buy and to sell. We donned white hats and coats to protect sanitary conditions as we wandered and we marveled at the variety and freshness. This market used to be in the center of Paris, its current location only dozens of years old but the atmosphere felt centuries old. The scene of the group of workers in their white coverall coats drinking their 7am wine after a long night’s work could have been been an oil painting done in the mid nineteenth century. 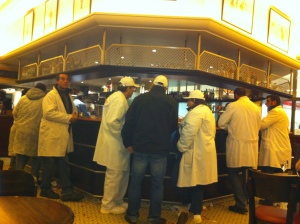 Which brings me to the breakfast wine! Both here and the exquisite retail market Les Halles in Lyon feature breakfasts of charcuterie, croissants (the best I have had in my life was in the workingman’s café at Rungis), cheese, espresso…and wine. This was my first (and almost certainly) my last breakfast wine. I felt quite American in my initial shock at having it served at 7am and quite French in my ability to enjoy it!

We had a demo, an exquisite lunch and the chance to make our own dinner at the famous Institut Paul Bocuse located in a gorgeous castle like home outside Lyon. Our hosts surprised us with gifts to bring home, a set of knives inscribed with the institute’s name and an orange apron with the same. I will treasure both.

We had dozens of meals together, some amazing, some “meh” but the company was always good and that meant the meal, regardless of content, was always enjoyed. And there was more, the incredibly moving Hospice in Beaune, a quick tour of the Cathedral in Reims, wine caves and tastings of cheeses and wines, a visit to Mumm’s , a pastry demo by chocolatier Vincent Dallet, some tours of landmarks and specialty stores for kitchen equipment, chocolates and various delicacies… it just went on and on. And so could I but I will stop. Or I might never!

I went on this journey without any kind of expectation, perhaps that is the optimal mindset for a journey of any kind. It proved to be a cornucopia of surprises.

The greatest surprise? For me, personally?

I have decided I would like to go to culinary school.

Anytime you find me in a kitchen chopping or blending something, you will hear me humming…because I am just that happy.When I look at the couple of photos taken of me on this trip, my face reflects pure joy. I think I should follow that joy.

I love this world of food! I am so happy when I can make good food and feed it to those I love. I love learning from others and I love eating beautifully prepared meals.

This is where I believe I am meant to go next in life. I hope I can have the courage to take the plunge.

I have visions of sugarplums dancing in my head.

16 Responses to Visions of (actual) Sugarplums Danced in Our Heads